Preached on February 2, 2020
Candlemas, Presentation of Jesus in the Temple

Today we celebrate the Presentation of Jesus in the Temple, and Candlemas when traditionally, churches would bless candles for use in the church and people’s homes during the remaining days of winter’s darkness. Since ancient times people have celebrated this day, it marks the halfway point between the winter solstice and the Spring equinox. Praising the slow, but steady returning of light, with the abiding hope that winter might end mercifully soon. Some traditions claimed the weather on this day would predict how much winter would remain before spring:

We still lean hopefully into spring, even with our well-lit lives, and heated homes. Because by the time we get to February, some part of us begins to yearn for Spring. We’re wired that way. And so we celebrate today: In the wider cultural, by either acclaiming or cursing the groundhog.

In the church, we take time to bless candles (which we will do with the children at 10am, blessing beeswax they have rolled into candles, and blessing the advent candles that will go home next winter for family Advent prayers as the darkness returns.)

We are particularly lucky to have a wedding here this evening – for which Mer, Kylie and their friends have put up these beautiful lights – adding to our celebration this morning. With the altar dressed in the white of a high holy day, we hear the story from Luke’s Gospel of Jesus being presented in the Temple by Mary and Joseph.

One of my favorite representations of this story is this painting by Giotto, The Presentation of the Infant Jesus in the Temple, painted around 1320. It’s on display as part of the mind-boggling collection in the Isabella Stuart Gardener Museum in Boston. Giotto’s painting illustrates the dramatic moment when Simeon and the prophet Anna recognize the child Jesus to be the savior they have been waiting for. Mary and Joseph are on the other side of the image, Joseph holds the doves for their offering, and Mary’s arms are outstretched to receive her son. In the center of the image, Jesus is struggling to get back to his mother.

At first, the painting appears to be a self-contained piece, with its balanced composition – two figures on either side of the ciborium symbolizing the Temple of Jerusalem. But it’s really one in a series of seven paintings depicting the life of Christ. (The other paintings are in Munich, London, and New York).[2] 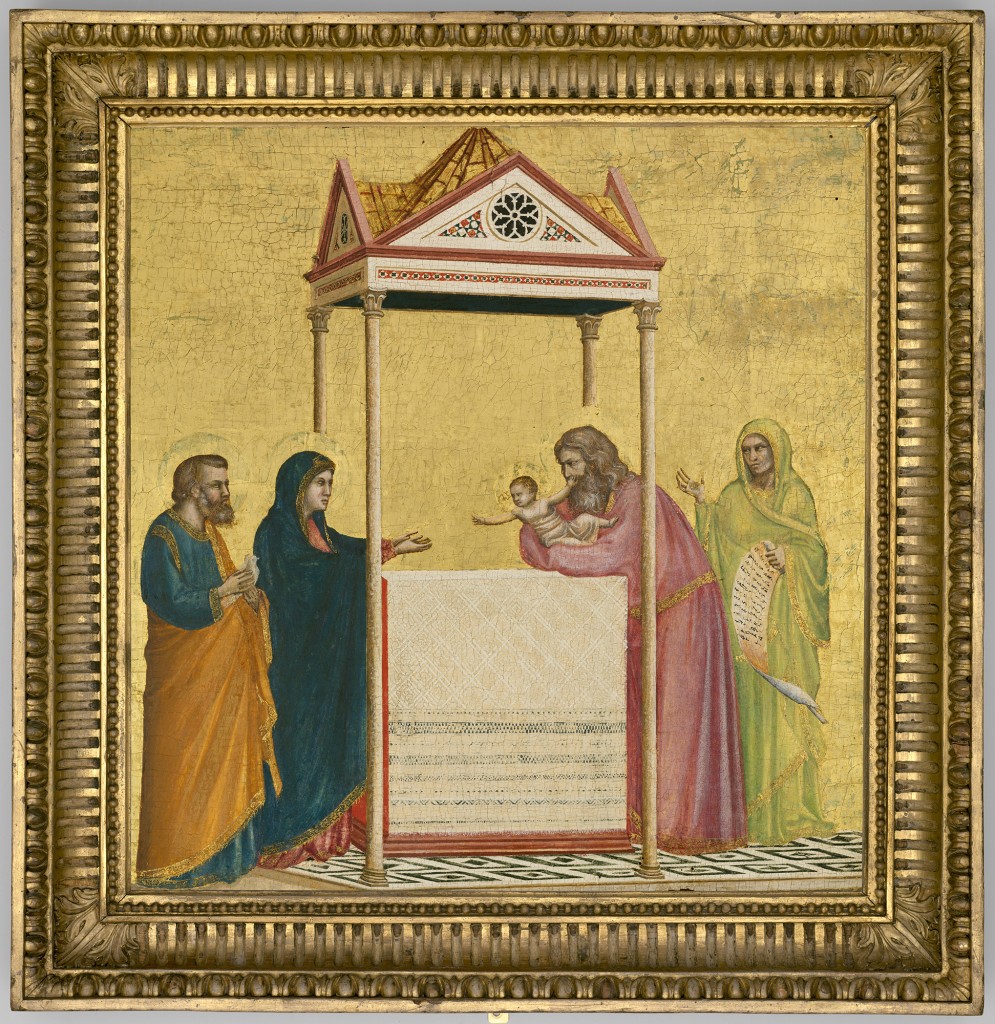 Like this painting, the event it depicts is one of a series, part of the greater whole. Mary and Joseph bring Jesus to the Temple as faithful Jewish families did, maintaining the religious rituals prescribed in Jewish Law. As a first-born male child, he needs to be bought back from God – who claimed possession of every firstborn in Israel during the Passover. Being faithful and obedient, Mary and Joseph bring Jesus to the Temple to be presented, and they offer the required sacrifice for his redemption.[3] Their offering of two pigeons, or turtledoves, illustrates their poverty, and their marginalized position in society. The one who will redeem the world — is redeemed before God by these faithful parents, who can afford only the minimum prescribed offering.[4]

In the wake of Joseph and Mary’s continued faithfulness, Jesus is recognized and affirmed as God’s agent of redemption – by eminently reliable sources. Simeon testifies to the faithfulness of God. Moved by the sight of the child Jesus, he expresses the peace found in knowing God will bring glory to the people, Israel, and “a light of revelation to the Gentiles.” The arrival of the long-expected one grants peace and joy; God’s promises are being fulfilled. While we don’t hear the words of the prophet Anna, Luke conveys the content of her message – this child is the one who sets the people free. Both Anna and Simeon have faithfully waited for God to break into the life of the world. Both now witness to the arrival of peace on earth, embodied in Jesus.[5]

Just as in our painting, Jesus is the center of the narrative, it all revolves around him, all affirming him as the fulfillment of God’s promises. This moment declares, proclaims, shouts with joy – that in this child, Jesus, God has broken into human history, the promises are fulfilled, and God is with us. Then, and now.

As we hear in the text, nothing would diminish God’s promises, not even the prophetic announcement of impending opposition, and expected suffering. Nor should we let any circumstance in our own day obscure the light of Christ or impede the love of God.

This story highlights Mary and Joseph’s abundant trust in God’s promises, even in the face of economic poverty (God will lift up the lowly and fill the hungry with good things). Jesus is steeped in their constant faithfulness, and in the ways of their tradition. The hope that upholds Mary and Joseph, also sustains Simeon and Anna, who wait faithfully for the intrusion of God into the world. They believe they will witness in-breaking of God’s presence, the gift of God’s love, and that the world will live in God’s peace, someday. Some of that hope seems to radiate from this painting, perhaps in the golden light surrounding everyone.

Though I think my love of this painting has everything to do with the experience of seeing it. There’s something about being at the Gardner museum – in all that chaos and beauty – and finding this painting displayed in the middle of a room, not against the wall but in a stand-alone piece of furniture, with the painting displayed so you can walk around it, look at it from all angles – get close (not too close, there are guards watching). The surprise of discovering it, and the realization that I knew what I was seeing – that experience mirrors the interruption of God into the lives of these faithful people – their surprise and their joy.

As we celebrate the rhythm of a faithful life, lived in the warp and weft of it all, and weave our own thread, we know that God breaks into the pattern in unexpected ways; in small, beautiful painting ways, and large, people saving, world-changing ways. Even sending God’s own son to be in the midst of us – or people like us. (Or perhaps not all that like us – poor people, oppressed people, brown middle eastern Jewish people.) God shows up – to the least of us, and fortunately to the rest of us. If we’re paying attention, faithfully – we can proclaim this story with joy. Here’s what we can’t do, we can’t allow the Gospel to be co-opted by those of the empire – those who are boxing out others, hoarding the resources, blocking the light and love. Particularly those who feel they have the right to exclude, to decide who is and who is NOT God’s own. We need to be wary of the rhetoric of the institution and those who have money and power, when they try to tell us who is NOT part of God’s mercy.

Last week the world remembered the 75th anniversary of the liberation of Auschwitz. Survivors and descendants spoke of loved ones who were murdered there, including those who had been on board the German ocean liner the MS St. Louis. The ship carried 937 Jewish refugees from Nazi Germany to Cuba, and then the United States, and our country refused them entry. The ship eventually returned to Europe, where 532 passengers were trapped when Germany conquered Western Europe, and 254 people, or roughly a fourth of the refugees, were murdered in concentration camps. A descendant of a passenger on the St. Louis remarked that the current rhetoric expresses the same reasoning used to turn away their ancestors – “they will be a drain on the resources of this country.” As was pointed out by news outlets – we are at risk of repeating the World War II tragedy of turning away refugees and sending them ‘home’ to their deaths.[6]

From our perspective as those who follow Jesus, the point is not about politics, but about the Gospel. For our nation has a habit of invoking Christian values, while implementing less than Christian policies. And that has always been dangerous – it co-opts our faithful tradition, making it and us a tool of the empire. The love of God deserves better – the light of Christ, sent to redeem a broken world, this is the embodiment of God, a light to enlighten the nations and the glory of God’s people.

Today we celebrate being half-way between the longest night and the spring equinox. As we see the days getting longer, we begin to believe that winter won’t last forever (no matter what the Groundhog says). Light is coming back into the world, and with it, we celebrate the light of Christ, the love of God breaking into the world. As people of faithfulness and hope, may we shine that light for all who live in darkness. Illuminating the wideness of God’s mercy, as agents of God’s reconciling love for the world. Amen.